Humans have the ability to figure out the spatial relations of objects in their visual field without any effort. It is certainly an evolutionary characteristic that has been embedded in our brain because of its importance in many common reasoning tasks. Since objects can be represented in computer systems, algorithms have been developed over the years to support the same functions. 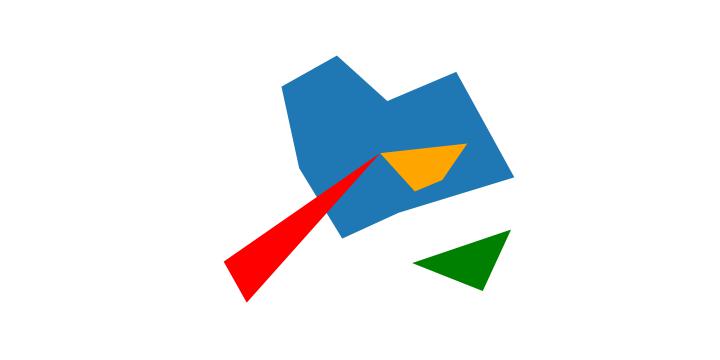 In many applications of geoscience, for example in emergency management or risk assessment, one wants to know the spatial context of the area in which a certain event occurred and link the spatial information to external data sources through a named entity. For example, it is not enough to know the extent of a flooded area, we want to know in which administrative region it lies, or we might want to know the distance of a wildfire from a real estate or a populated area. In other words, we want to know the spatial relation between the area in which an event occurred and the area that belongs to or is run by a owner or authority. This post describes the notebook that I have developed on the implementation of spatial relations in GeoPandas. The reader can go directly to the Jupyter notebook in case she or he wants to see the code. We will deal only with topological relations, a subclass of spatial relations that don’t need a metric, that is a way to compute the distance between two spatial objects. The notebook starts by creating some simple spatial objects, points and polygons, to see what kind of topological relations can be established between them. Finally, the topological relations will be tested between our abstract layers, blue, red, orange and green, and the geometry of Marche, one of the 20 regions of Italy, and of its administrative units, i.e. the municipalities.

Spatial objects such as points, lines and polygons, may have one or more topological relationships such as contains, overlap, within, touches. The Python package Shapely, included in GeoPandas, implements such functions for points, lines and polygons. Shapely is a Python port of GEOS, the C++ port of the Java Topology Suite (JTS), a Java implementation of topological relations. We start by importing the Python packages we are going to use. We use the minimum set of packages to get the job done.

Even if establishing the topological relationship between two spatial objects doesn’t involve a metric, objects must be represented using the same coordinate reference system (CRS). We will create some spatial objects using the unprojected reference system WGS84 EPSG:4326. We will also import two datasets: the border of the Marche region and the borders of its administrative units, the municipalities of the region. We will see what spatial relations exists between our abstract layers and the Marche region and its administrative units. The two datasets have their own CRS whose ESPG code is EPSG:32632. This CRS is projected on a 2D surface using the Transverse Mercator projection and the unit of measure is the meter so, in order to use the spatial relationships between the spatial objects of our layers and the polygons of the Marche region and its administrative units we will have to change the CRS of our layers to be the same as that used for the region and its municipalities and transform the coordinates of points and polygons accordingly. 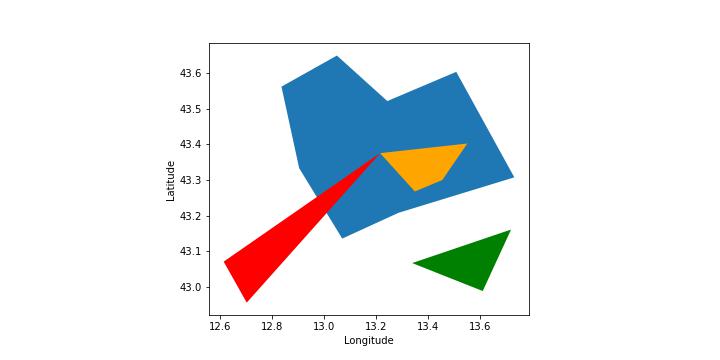 We will use spatial objects such as Points, Lines and Polygons for which a set of coordinate pairs will be assigned. A layer is a collection of one or more spatial objects that describes a certain event that occurred over an area of interest. In GeoPandas a layer is built using a GeoDataFrame. A GeoDataFrame is a subclass of the DataFrame class of the Pandas Python library that has a column with geometry.

We apply the topological relations: within, intersects and touch between the polygons that we have defined. We will not use contains since it’s the inverse of within. We will apply the topological relations to pairs of polygons from two different layers. The methods take the left operand from a polygon of one layer and the right operand from the corresponding polygon of the other layer. By “corresponding” we mean the polygons have the same index value in the two GeoDataFrame used to implement our layers.

From the relation definition in Geopandas: “An object is said to be within another if at least one of its points is located in the interior and no points are located in the exterior of the other.”

From the relation definition in GeoPandas: “An object is said to intersect another if its boundary and interior intersects in any way with those of the other.”

From the relation definition: “An object is said to touch another if it has at least one point in common with other and its interior does not intersect with any part of the other. Overlapping features therefore do not touch.”

When we want to apply the topological relations to spatial objects from different layers (GeoDataFrame) we have to check that the coordinate reference system (CRS) used in the two layers is the same. In the following sections we will use two datasets that use the Transverse Mercator projection (EPSG:32632). Since our colored layers use the WGS84 unprojected CRS (EPSG:4362) we will have to change it and use the EPSG:32632. When we change the CRS GeoPandas transforms the coordinates of the points automatically. The coordinate units in the Transverse Mercator projection is in meters instead of degrees.

Spatial relations in the real world

Our points and polygons in the blue, red, orange and green layers are not completely abstract. They represent towns and areas in the Marche region. We want to find out which spatial relationships between them, the Marche region and its administrative units, the municipalities, hold true and which do not. 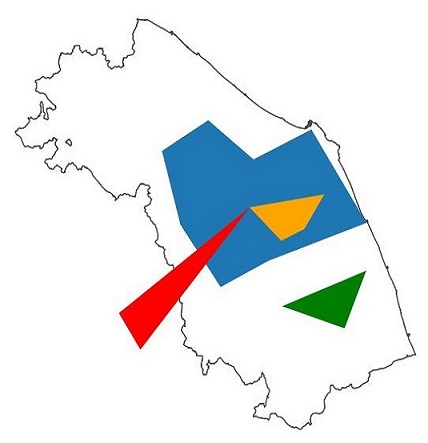 Municipalities of the Marche region

As we can see the within relationship is stronger than intersects. We might want to see only the municipalities that intercept the blue area but are not completely within it. With GeoPandas such logic operation can be done with one line of code. 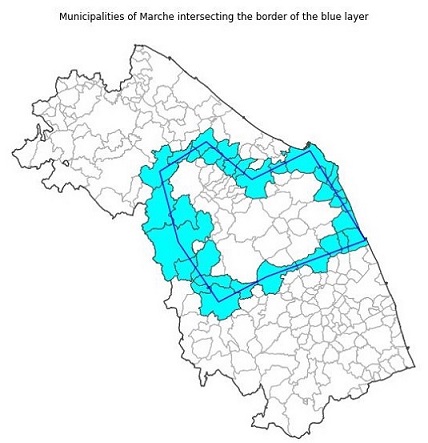 We have seen some examples of spatial relations between polygons in GeoPandas. We have applied such relations to geometries of the municipalities of the Marche region in Italy. We have changed the coordinate reference system of our example layers to be the same as that used for the Marche region and its administrative units. We have also performed a further logical operation dividing the geometries of the municipalities that strictly intersect one of our fictional layer from those that lie completely in our layer using logical operators on the result of the spatial relations. Spatial relations are fundamental to perform spatial analysis over multiple layers. We want to underline that they also provide a mean to integrate the information about events, such as flooded areas, with contextual information from external data sources by using the name or identifier of a named entity whose geometry has a spatial relation with the event. As said in the introduction the Jupyter notebook with the Python code used for this post is available on my GitHub repository.